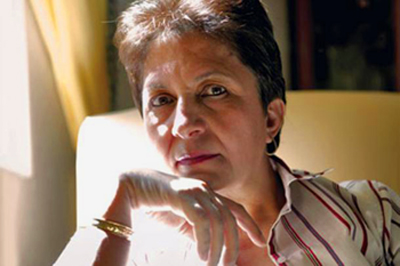 In 2009, Wafa Sultan published her story in a book that captures the drama and courage of her struggle for the freedom to speak against Shariah: A God Who Hates: The Courageous Woman Who Inflamed the Muslim World Speaks Out Against the Evils of Islam.  She has become a role-model for all who support freedom of speech and religion, and especially to those who speak up for women’s rights and liberties worldwide.  Visit her website here.

Wafa trained as a doctor and psychiatrist in her native Syria, and practiced there for several years.  She became a secularist (non-observant) by the 1979 atrocities committed by Islamic extremists of the Muslim Brotherhood against innocent Syrians, including her witnessing while she was a medical student the machine-gun assassination of her professor, Yusef al Yusef, an ophthalmologist from the university who was renowned outside Syria. “They shot hundreds of bullets into him, shouting, ‘Allahu Akbar!’ ” she said. “At that point, I lost my trust in their god and began to question all our teachings. It was the turning point of my life, and it has led me to this present point. I had to leave. I had to look for another god.”

Wafa and her husband and children immigrated to the United States in 1989, where she moved to Los Angeles, California and became a naturalized citizen. From the time of her arrival she begun to contribute articles to Arabic publications in the United States and published three books in Arabic.

On February 21, 2006, she took part in Al Jazeera’s weekly 45-minute discussion program The Opposite Direction. She spoke from Los Angeles, arguing with host Faisal al-Qassem and with Ibrahim Al-Khouli, a professor at Al-Azhar University in Cairo (Egypt), about Samuel P. Huntington’s Clash of Civilizations theory.  She criticised Muslims for treating non-Muslims differently, and for not recognizing the accomplishments of Jewish and other members of non-Muslim society while using their wealth and technology.  In an angry and dangerous response, the leader of the Muslim Brotherhood, Sheikh Yousef al Qaradhawi, subsequently targeted her for retribution on Al Jazeera, in which he stated, “She Said Unbearable, Ghastly Things That Made My Hair Stand On End.”

Here is that video, at her website at http://wafasultan.org/ and below:

Following his public statement, she has continuously received  threats against herself and her family.  The New York Times followed her story closely in the article, “For Muslim Who Says Violence Destroys Islam, Violent Threats.”

And in 2006, Time Magazine featured her  as one of “top 100 men and women whose power, talent or moral example is transforming our world.”

In 2009, Wafa founded a group for people who have left Islam – Former Muslims United – along with Nonie Darwish and several other authors and experts nationwide.

She continues to publish and to speak out nationwide against all abuses of Shariah law.