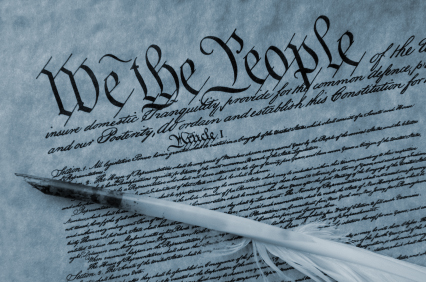 In 2011, the Center for Security Policy assembled a 2 page flyer that succinctly explains the differences between the rights guaranteed in the US Constitution and Shariah.

‘A Guide to Shariah Law vs. the Constitution‘ is available as a downloadable PDF file. The text is provided below. 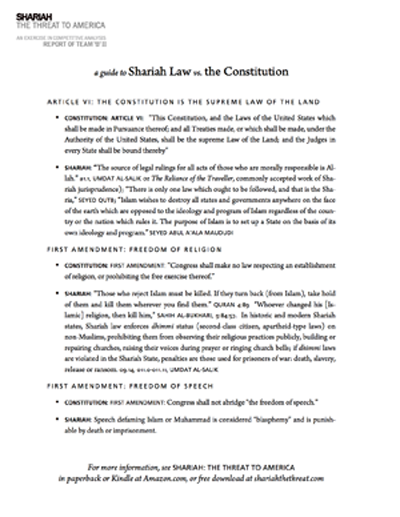 A Guide to Shariah Law vs. the Constitution

ARTICLE VI : THE CONSTITUTION IS THE SUPREME LAW OF THE LAND

SHARIAH: “The source of legal rulings for all acts of those who are morally responsible is Allah.” a1.1, UMDAT  AL-­SALIK or The Reliance of the Traveller, commonly accepted work of Sha- riah jurisprudence); “There is only one law which ought to be followed, and that is the Sharia,” SEYED QUTB; “Islam wishes to destroy all states and governments anywhere on the face of the earth which are opposed to the ideology and program of Islam regardless of the country or the nation which rules it. The purpose of Islam is to set up a State on the basis of its own ideology and program.” SEYED ABUL A’ALA MAUDUDI

CONSTITUTION:  FIRST AMENDMENT:  “Congress shall make no law respecting an establishment of religion, or prohibiting the free exercise thereof.”

SHARIAH: “Those who reject Islam must be killed. If they turn back (from Islam), take hold of them and kill them wherever you find them.” QURAN  4:89   “Whoever changed his [Is- lamic] religion, then kill him,” SAHIH AL-­BUKHARI,  9:84:57.  In historic and modern Shariah states, Shariah law enforces dhimmi status (second-class citizen, apartheid-type laws) on non-Muslims, prohibiting them from observing their religious practices publicly, building or repairing churches, raising their voices during prayer or ringing church bells; if dhimmi laws are violated in the Shariah State, penalties are those used for prisoners of war: death, slavery, release or ransom. o9.14, o11.0-­o11.11, UMDAT AL-­SALIK

CONSTITUTION:  FIRST AMENDMENT: Congress shall not abridge “the freedom of speech.”
SHARIAH:  Speech defaming Islam or Muhammad is considered “blasphemy” and is punishable by death or imprisonment.

CONSTITUTION:  FIRST AMENDMENT: “Congress cannot take away the right of the people to pe- tition the Government for a redress of grievances.”

SHARIAH: Non-Muslims are not to harbor any hostility toward the Islamic state or give com- fort to those who disagree with Islamic government.

CONSTITUTION:  SECOND AMENDMENT: “The right of the people to keep and bear arms shall not be infringed.”

CONSTITUTION:  FIFTH AMENDMENT:  “no person shall be held to answer for a capital or other- wise infamous crime… without due process of law.”  SIXTH AMENDMENT:   guarantees a “pub- lic trial by an impartial jury.”  SEVENTH AMENDMENT:  “the right of trial by jury shall be preserved.”

SHARIAH:  “Muhammad  said,  ‘No  Muslim  should  be  killed  for  killing  a  Kafir  (infidel).’” HADITH SAHIH AL-­BUKHARI   Non-Muslims are prohibited from testifying against Muslims.  A woman’s testimony is equal to half of a man’s.

SHARIAH:  Under Shariah punishments are barbaric: “Cut off the hands of thieves, whether they are male or female, as punishment for what they have done – a deterrent from Allah.” QURAN 5:38   A raped woman is punished: “The woman and the man guilty of adultery or fornication – flog each of them with a hundred stripes” SURA 24:2

CONSTITUTION:    FOURTEENTH AMENDMENT:  “No State shall make or enforce any law which shall abridge the privileges or immunities of citizens of the United States; nor shall any State deprive any person of life, liberty, or property, without due process of law; nor deny to any person within its jurisdiction the equal protection of the laws.”

Shariah: Under dhimmi laws enforced in modern Shariah states, Jews, Christians and other non-Muslims are not equal to Muslims before the law.  Under Shariah law, women, girls, apostates, homosexuals and “blasphemers” are all denied equality under the law.