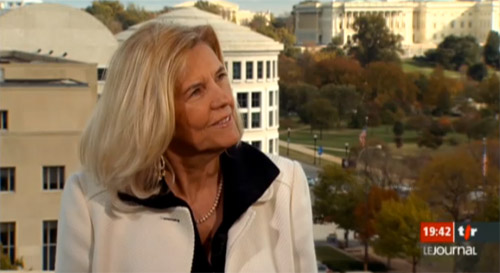 Rosine Ghawji’s tells her story, “Married to Al Qaeda”  below from her presentation on her case at the David Horowitz Freedom Center conference.  A summary of her story – her struggle for custody of her two sons and her family’s safety –  follows the two videos.

In a gripping article from 2008, the well-known author and Shariah expert Robert Spencer presented the facts of Rosine Ghawji’s case here.  Update – the boys were able to stay with their mother, once they had turned eighteen.  Rosine continues to work to expose the problems in the court system with judges that impose Shariah law on her life and the lives of her sons.  Excerpts from Robert Spencer’s article on Rosine’s story:

With two young girls murdered in Texas, likely victims of an “honor killing” by their father just weeks ago, is it wise for American authorities to ignore death threats issued by a Muslim father to his non-Muslim children? That’s just the latest disquieting question emerging from a contentious divorce case in Tennessee.

Rosine Ghawji has for years now contended that her ex-husband, Maher Ghawji, is a Wahhabi and a member of the Muslim Brotherhood, and that he has been involved in terrorist activities. Maher Ghawji has contested this, but new statements by their two sons give the allegations a new urgency and raise serious questions about how the judge assigned to the case has treated concerns for the boys’ safety.

Rosine Ghawji has marshaled an impressive array of evidence to support her claims about Maher Ghawji’s ties to the global jihad, but Judge Donna Fields of the Shelby County Circuit Court was unmoved. In her Final Decree of Absolute Divorce, she wrote: “Wife has seriously alienated the children from Husband with unproven and baseless accusations.” She even decreed that Maher Ghawji would have the final say over the religious upbringing of the couple’s two children, Louis, now 19, and KK, 16 – thus ensuring that they would be raised Muslim at least until they attained majority. Louis Ghawji notes that at Judge Fields’ final ruling on the divorce case in February 2007, she declared: “Those children will have to follow the Muslim religion.” She ordered them to accompany their father on the Hajj, the Muslim pilgrimage to Mecca – which is only open to Muslims.

The young men, however, wish to live as Christians – and by their own account this makes them all the more vulnerable to their father. Louis and KK Ghawji have had numerous chances to observe their father up close, and they don’t share the judge’s claim that their mother’s accusations about his jihadist sentiments and activities are “unproven and baseless.” Last week Louis Ghawji wrote to Judge Fields on the issue of his and his brother’s passports, which were taken by the court and subsequently, according to Judge Fields, lost. Louis Ghawji recalled that in June 2004, Maher Ghawji told him and his brother that they would be traveling to Syria in a few days.

“My brother and I panicked,” wrote Louis. “We knew the extremist Muslim ideology from our father. He was a nut case. And obsessed. We still had his threats of death and him telling us that the Islamic law requires to kill somebody who is born Muslim but become a Christian [in] our mind.”

Louis Ghawji has been sounding this alarm for quite some time. Last May he commented on a Memphis Flyer article about the divorce and custody battle, writing that Judge Fields was still holding onto the passports, “preventing us to go to France but she allows us to go to Pilgrimage with my dad in Saudi Arabia. SHE IS FORCING MY YOUNG BROTHER TO BE A MUSLIM, AND SHE GAVE CUSTODY TO MY DAD.” Was their father a terrorist? “I do not know if my dad or his brother are involved in terrorism; I am not working for the CIA” – however, “all I know is the life we were living with him He always was a fanatic Muslim. He hates Jews and did not want a Jewish boy sitting in our house. He hates the Western Civilization and America. I would have never been allowed to go to a dance or to a party where girls were dancing. We were not allowed to touch a dog or we had to wash our hands seven times.”

Louis’s brother, KK, concurs. He wrote to Judge Fields, “I am not a Muslim and I will never be. I was going to the mosque every Sunday with my mother because she wanted us to learn also the culture of our dad, and I hated it. With the example of my father telling lies after lies, breaking law after law, without being punished because he is a doctor. With the memories of what he told us at home and the way he was acting, I sure don’t want to become a man like him.” And ominously, “One day he told me that if I was not Muslim, I will not be his son, and he would rather see me dead. I will never forget this, and I know he is a man of his word as Islam is concerned, and one day he will put his threat to execution. It is a matter of time.”

When a man has made such threats according to the testimony of both of his sons, should it not at very least be a matter for investigation? Yet thus far Judge Fields appears impervious to the boys’ appeals. Louis Ghawji concluded an earlier letter to her with this: “Just to let you know that the Ghawji brothers are a new breed of young American. We will not side with terrorism for profit and we will fight for our rights, and with God on our side, we will prevail.”